Skip to content
Home/Uncategorized/Stagnant Population Growth, Low-Wage Jobs and High Cost of Living: the New Reality in the Mid-Hudson Valley
Previous Next 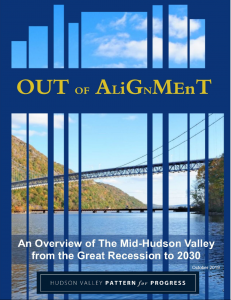 NEWBURGH (October 3, 2019) – Pattern for Progress has released the findings of a year-long, wide-ranging study that finds the Mid-Hudson Valley has reached a demographic cliff that is affecting the socio-economic fabric of the region.

The research, which covers the counties of Orange, Putnam, Dutchess, Ulster, Sullivan, Greene and Columbia counties, takes a comprehensive look at various regional trends, including flat population growth, declining school enrollment, stagnant wages, the shrinking labor force and the rising cost of living. The study also examines what these trends mean for the region in the next decade.

“Ten years after the Great Recession, we find a regional economy that is out of alignment with its demographics,” said Pattern President and CEO Jonathan Drapkin. “Our population growth is flat, which impacts not just our schools but also the home-grown labor force. Many high-paying jobs that existed before the Great Recession have been replaced by low-wage alternatives that makes it difficult to raise a family here. This gives young people a cause to leave the area. At the same time, we are becoming older as a region but our economy is not geared toward this reality.”

“As grave as these challenges are, they provide us an opportunity to collaborate and develop strategies to modify our economy so that we can bring the region back into alignment in the coming decade,” said Drapkin.

Below are some of the main findings of the study:

The study contains 23 mini reports on key subject areas that Pattern has identified as having undergone significant changes since the Great Recession. These include demographic changes, the shrinking middle class, student enrollment, housing trends, health care expansion, the labor force, migration trends, the growth of tourism, climate change and property taxes, among others.

The full version of the report is available online at https://www.hvoutofalignment.com