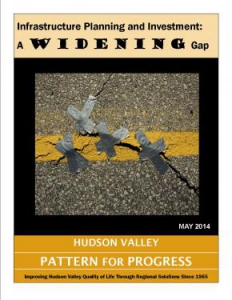 NEWBURGH – Hudson Valley Pattern for Progress today released a report and survey results addressing widespread infrastructure concerns in the nine-county region of New York State served by the policy organization. The report, “Infrastructure Planning and Investment: A Widening Gap,” comes as the nation recognizes Infrastructure Week and on the heels of President Barack Obama’s May 14 visit to the Hudson Valley yesterday in which he called attention to critical infrastructure issues.

The report underscores increasing concerns over the state of bridges, roads, water and sewer systems and makes a number of observations and recommendations, many of them about the need for better planning.

“One of the major findings that came out of the survey is that 57% municipalities do not do capital improvement planning,” said March Gallagher, principal author of the report and chief strategy officer at Pattern for Progress. Decreased investment in infrastructure emphasizes the need for sound planning and for the treatment of municipal infrastructure as an asset that is owned by the public. In the report, Gallagher called for an asset management approach to infrastructure planning. Among its seven other recommendations, the report says municipalities should consider sharing services and that the state should allow for design-build contracting.

A total of 126 towns, villages and cities in a region of 238 such municipalities participated in the survey. The response rate of 53%–more than five times the standard survey success rate–is alone a striking indication of the level of concern over the issue of infrastructure, Gallagher said. Responses came in from all over the Hudson Valley including municipalities in Westchester, Rockland, Orange, Ulster, Putnam, Dutchess, Sullivan, Greene and Columbia counties.solutions agenda–which includes work in infrastructure, housing and community development.

The survey and report were released in advance of Pattern’s Monday,  May 19, conference “Infrastructure Issues: Crumbling or Tumbling?” Some 150 municipal leaders and infrastructure managers are expected to attend the half-day conference featuring 14 panelists and presenters. Keynote speakers for the event are Congressman Sean Maloney and  NYS Environmental Facilities Corporation General Counsel James R. Levine.

Views from the conference: 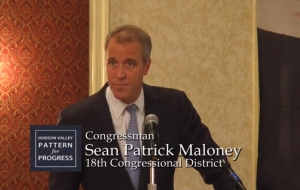 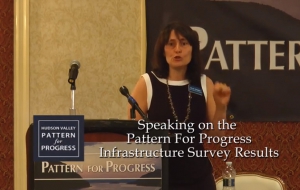 A Slide Show from the conference

The conference begins at 8 a.m. and concludes at 1:30 p.m. at Anthony’s Pier 9, New Windsor. Registration costs are $50 for Pattern members, $60 for Non-Members, and $30 for municipal or school district employees. Contact Pattern at 845-565-4900 or email to make a reservation.

Pattern for Progress is a not-for-profit policy and planning organization that promotes regional, balanced and sustainable solutions to enhance the growth and vitality of the Hudson Valley. Founded in 1965 by business, academic and civic leaders, and based in Newburgh, N.Y., Pattern works within the nine-county area that includes Columbia, Dutchess, Greene, Orange, Putnam, Rockland, Sullivan, Ulster and Westchester.